I am writing this as we come out of Thanksgiving weekend, one of my favorite holidays. Thanksgiving represents an opportunity to reflect on the many things we have to be thankful for and spend time with the people we care about the most. I hope that was true for you as well.

Where are we, and what is to come?

As we near the end of the eleventh month of this bear market, I thought it would be helpful to talk about the histories of these cycles and set your expectations of what is coming before year-end.

Are we in a recession?

Recessions are a funny thing. There are two definitions of a recession. The first is the textbook definition but does NOT apply to the US: two consecutive quarters of declining GDP. In other words, if the economy shrinks for two straight quarters, it is considered a recession. 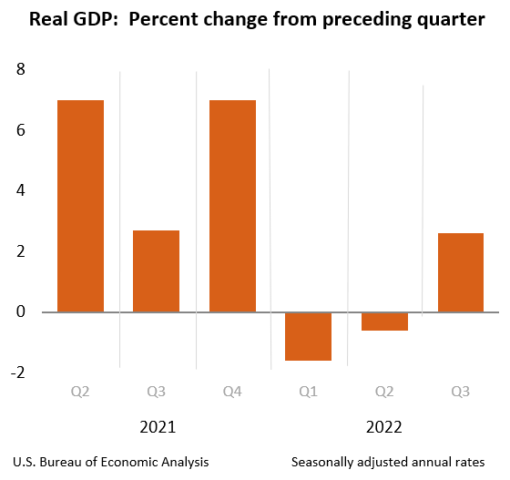 The definition of a recession, as the US has defined it, is determined by a little-known government-appointed group of economists known as the Business Cycle Dating Committee. This group has not committed to standard criteria or a measurable data point; instead, they prefer to keep it subjective. They have written that a recession "involves a significant decline in economic activity that is spread across the economy and lasts more than a few months." This vagueness means that just about any pundit on TV can speculate about whether we are nearing, in, or exiting a recession.

The US currently does not meet the textbook or Business Cycle Dating Committee definition. What we don't know, and will not know for months to come, is if we are at the very beginning of a recession. ;

Below is a table that reflects information about stock market declines. The particular decline we are experiencing is almost 11 months in duration, about 17% off the high (as of this writing on 11/28/2022). The low point was in late September and early October when the market flirted with a 25% decline.

As you can see in the table below, since WWII, there have been nine similar declines (of 20% to 40%), with similar profiles on the average depth (average of 27.9% compared to our max drawdown of 25.4% on October 12 according to S&P 500 data from the St. Louis Federal Reserve) and length (10.6 months to our current 11 months).

While this is not predictive of where we are in the market cycle, it is certainly instructive to help us understand that this happened before and will happen again at some point in the future. In all historical cases, the major indexes eventually reclaim their former highs.

Table 1: Declines in the S&P 500 Index since the end of WWII

Where does THIS market cycle go?

The next question that might come to mind is likely something along the lines of "have we seen the bottom?" or "where does it go from here?"

The short answer to both is: I don't know. I can tell you that this story has one central theme and driving force: inflation. High inflation has forced the Fed to raise interest rates. Rising interest rates are generally bad for the stock market, but it is one of the Fed's only tools to fight inflation.

The Fed has three mandates: maintain a stable and low level of inflation, achieve full employment, and keep interest rates low. To honor all 3 of those mandates is akin to spinning plates, and it is challenging to keep all three going simultaneously. For the time being, the Fed has intimated that they are only focused on inflation, implying interest rates and unemployment will rise.

In the coming weeks, three important indicators will give us some idea if we have further to go with the bear market or if we can see some light at the end of the tunnel.

If you have heard the phrase "winter is coming", but don't know the origin, it is the slogan of the House of Stark in the book series and subsequent HBO series "Game of Thrones." You usually think of slogans as being more upbeat. Nike suggests that you "Just Do It," and Allstate proclaims, "You're in good hands." The Stark family uses the slightly darker "Winter is Coming," which they can work into about any conversation. I believe this is used as both a predictive and cautionary statement.

From a predictive standpoint, the slogan is always right: another winter is always coming. In Game of Thrones, there are no set seasons – summer can last for years on end, and when winter comes, it can vary in severity from mild to downright awful. Since there are no predictable cycles, that statement has zero predictive value. It's a bit like markets – there are good periods followed by bad periods. This lack of predictive value is one of the reasons that I sometimes laugh when I hear predictions in the media about recessions. I am thinking of one noted market pundit who says, year after year, without any irony, that "winter is coming." Of course, he is wrong for years on end…until he's finally right, and then he won't stop talking about how great he is at making predictions.

There is another layer to this phrase, which is cautionary. This is the primary usage by the Stark family, which is a cautionary warning that summer can't and won't last forever. The phrase implies that, as a matter of practicality, one should always be prepared for the winter that will inevitably come. That is the most instructive interpretation and one that befits where we are today.

While the phrase "winter is coming" is dark, I don't think it is alarmist. It is pragmatic. I don't know where the economy and markets go from here – it could be that we have just experienced a mild winter, or it could be the beginning of a deeper freeze. Please consider this an opportunity to confirm that we are prepared for any eventuality. For me, that means you should stay invested for the long term. As pointed out earlier, the downward cycle that we are currently in will eventually end. When that happens, we want to ensure that our portfolio is positioned appropriately. Additionally, we should be cautious in the short term – do not overextend ourselves, watch our cash flow, consider what would happen if we lost an income source, and make sure that our emergency fund is fully funded.

I trust you have found this review to be educational and insightful. If you have questions or want to discuss matters, please call me or any of my team members.

Thank you for your trust, confidence, and opportunity to serve as your financial advisor.