I hope you are enjoying the change of seasons as much as I am. There is something about the crisp night air this time of year that I find invigorating and energizing.

For reasons that are not fully understood, September has historically been the worst month for stocks, according to the average S&P 500 return for each month (Source: St. Louis Federal Reserve dating back to 1970). As illustrated in Table 1, this past September was indeed a weak month. It was also the worst month of 2022 for the S&P 500 (Source: MarketWatch, monthly return data). 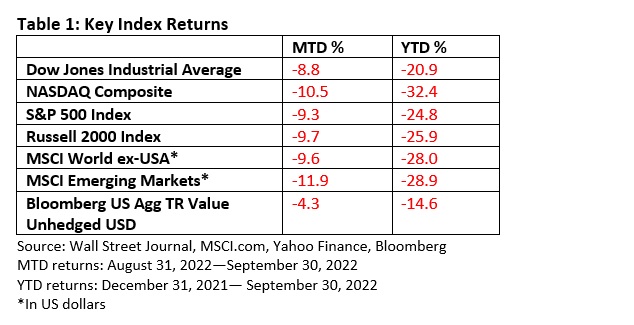 What worked against stocks last month?

The first, second, and third reason for this: rate hikes. The Federal Reserve hiked the fed fund rate another 75 basis points (75 bp = 0.75%) to a target range of 3.00% to 3.25% last month, maintained its aggressive stance, and suggested in its economic projections that we might see another 125 bp by year-end.

Why is the Federal Reserve raising interest rates at a pace not seen since the second half of 1980? Inflation remains stubbornly high.

Ultimately, price stability is the foundation of a strong economy and long-lasting economic expansion. But the Fed's rate-hike hammer has not landed without pain.

While the Federal Reserve is not publicly forecasting a recession, its latest set of projections released last month show it believes its inflation-fighting campaign will boost the unemployment rate next year. High unemployment leads to lower aggregate demand, which can lead to a recession. Thus investors are also growing increasingly concerned the economy could sink into a deeper recession next year, which would further depress earnings.

In addition, the sharp increase in interest rates has led to a much stronger dollar since parking cash safely in the U.S. offers a higher return to foreign investors. A strong dollar reduces the price of imported goods and the cost of an overseas vacation, but the rapid increase in the greenback against foreign currencies is raising fears the Fed could unintentionally “break” something in the financial markets, either at home or abroad. It happened during the early 1980s, when sharp rate hikes put a heavy strain on Latin America, and again in 1994, when rate hikes exacerbated problems in Mexico, leading to a bailout. It also led to bankruptcy in Orange County, California.

We are not forecasting an imminent financial crisis, and any unexpected shift by the Federal Reserve could alleviate financial market pressures.

That said, we recognized that the Fed’s steely resolve to bring down inflation has created pain in financial markets, and that will likely continue for some time

Taking a longer-term view, we want to emphasize that bear markets eventually come to an end, and bottoms typically occur when negative sentiment is high. According to Charles Schwab the average bull market since the late 1960s ran for about six years, delivering an average cumulative return of over 200% for the S&P 500 Index. The average bear market lasted roughly 15 months, with an average cumulative loss of 38.4%. The longest bear market lasted just over two and a half years. It was followed by a nearly five-year bull run. The shortest occurred in 2020 and lasted only 33 days.

If this were an “average” bear market, we are approximately 6 months from a market bottom, and would see the SP500 drop by an additional 14%. Those are pretty sobering numbers.

There are rays of hope out there. In the following two charts there is evidence that the markets are “fairly priced”. The first chart shows the long-term return of the SP500 from 1991 to June 2022. The regression line (the dotted line) represents a compounded 10% rate of return which includes price appreciation and dividend reinvestment. You will notice that the dotted line is an average long term rate of return, with the actual market index spending long periods of time above or below that line. You will also notice that the market recently went below the trend line. While simply being below the trend line does not mean that it will reverse, as the graph clearly shows that markets can function below the trend line for long periods of time. What can be concluded from this graph is that markets have moved from being overvalued based on long term trends to being fairly valued (or potentially undervalued) based on long term trends. 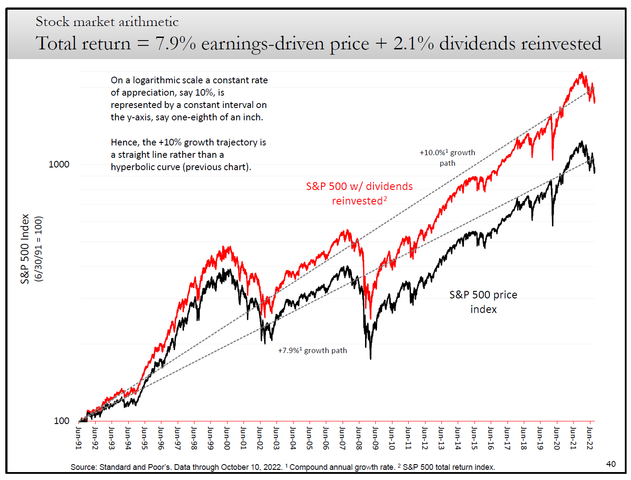 It is worth noting that this ratio is not a perfect measure. There are periods of time when the P/E ratio will have an unexpected value. This can happen during periods of recession, when earnings are lower than average. For example, in the later stages of the Great Financial Crisis (GFC, roughly from the beginning of 2008 to the end of 2009) the P/E ratio shot up. This anomaly is based on the fact that that the “E” (earnings) were very low in the depths of the GFC, effectively distorting the ratio.

A recent (quarterly) reading of the SP500 P/E ratio was 19.69. This is below the 20 year average of 24.37. Again, we should stop short of drawing conclusions about where we are in this market cycle based solely on this graph. However, it is worth noting that this reading implies we are in a P/E range that indicates a fair market (or potentially undervalued) valuation. 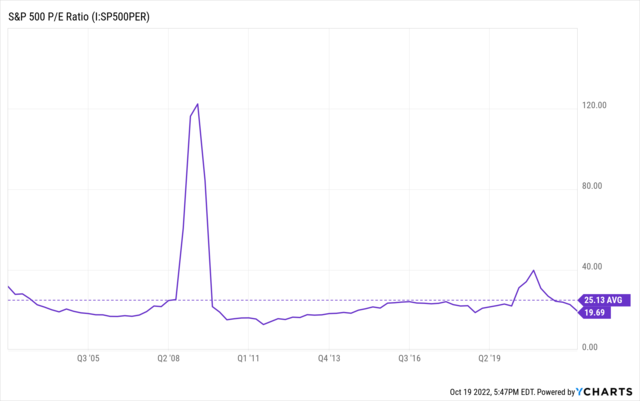 The final graph for your consideration is meant to show the relationship between market bottoms and recessions. The period of the graph is 1957 to 2022 and shows the S&P 500 vs ten grey bars showing periods of recession. In seven of the ten recessionary periods, the stock market found a bottom 3-6 months prior to the official end of the recession. This is what is meant by the stock market being a “forward looking” mechanism, and pricing in expectations about the future. It is also one of the reasons that it is so hard to predict where and when a market bottom will occur, and why short term trading in anticipation of market bottoms is so difficult. 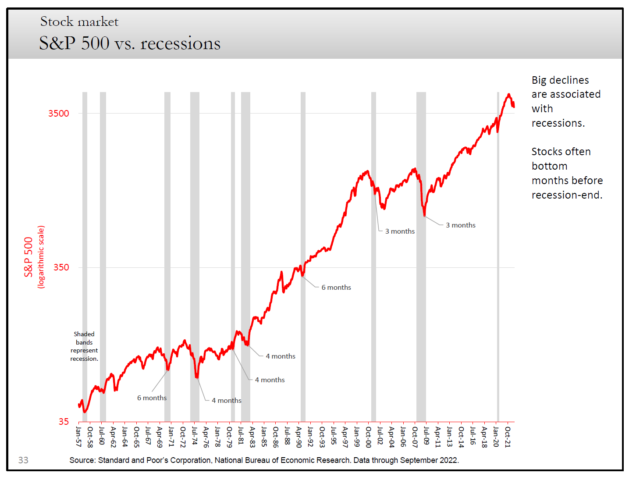 Here is a hypothetical question for you: would you prefer to have high inflation, or a recession? I think I would prefer a recession. The reason is that recessions are somewhat predictable, we have lived through them before, and there are monetary and fiscal tools to propel us out of a recession. Periods of high inflation are fewer and farther between, are less predictable, and I there are less tools to combat inflation. Inflation is also incredibly destructive to the savings of those affected.

There are real examples of extremely high inflation that exist today. A recent article on CNBC documented the case of Turkey, which has experienced inflation of 83% this year. That means that if you had $100 in your wallet a year ago, that same $100 would have roughly 55% of the purchasing power today. We may have experienced high inflation in the past year, it is nowhere near the dire situation in Turkey.

We will not venture to guess how October might end, and we would counsel against making portfolio adjustments based on a one-month time horizon.

October has a spooky reputation—1929, 1987, 2008. Since the 1970s, it has been a volatile month. Standard deviation (which is a measure of the variability of returns) of monthly returns of 6.3% is the highest monthly reading) but historically has been a strong month, according to S&P 500 data (Source: St. Louis Federal Reserve).

I trust you have found this review to be educational and insightful. If you have any questions or would like to discuss any matters, please feel free to give me or any of my team members a call.

As always, thank you for the trust, confidence, and the opportunity to serve as your financial advisor.

This is being provided for informational purposes only and should not be construed as a recommendation to buy or sell any specific securities. Past performance is no guarantee of future results, and all investing involves risk. Index returns shown are not reflective of actual performance nor reflect fees and expenses applicable to investing. One cannot invest directly in an index. The views expressed are those of Chris Duke and do not necessarily reflect the views of Mutual Advisors, LLC, or any of its affiliates.