What in the world is going on?

The markets have been a little…turbulent…of late. In the last client letter dated August 18, 2022, we discussed that the Federal Reserve (Fed for short) would drive the markets in the short term. That is unchanged in this letter, but the tone of the Fed has changed, and I thought a little context might be helpful.

How did we get here?

First, let us undertake a little primer on the Fed. The Fed is said to have a “dual mandate” to maintain a low and stable level of inflation while promoting maximum employment. Other secondary functions of the Fed include keeping interest rates low and stable, controlling the money supply, acting as a lender of last resort, and others. The challenge is that sometimes these mandates are like pushing on a balloon - you push on one side of the balloon, and the other side of the balloon bulges out. By way of example, low unemployment can lead to high inflation, so a balancing of priorities takes place behind closed doors at the Fed.

The Fed has provided guidance and recently reiterated that their definition of low inflation is around 2%. As you can see in the chart below, inflation has been relatively steady and close to this target for the better part of two decades. 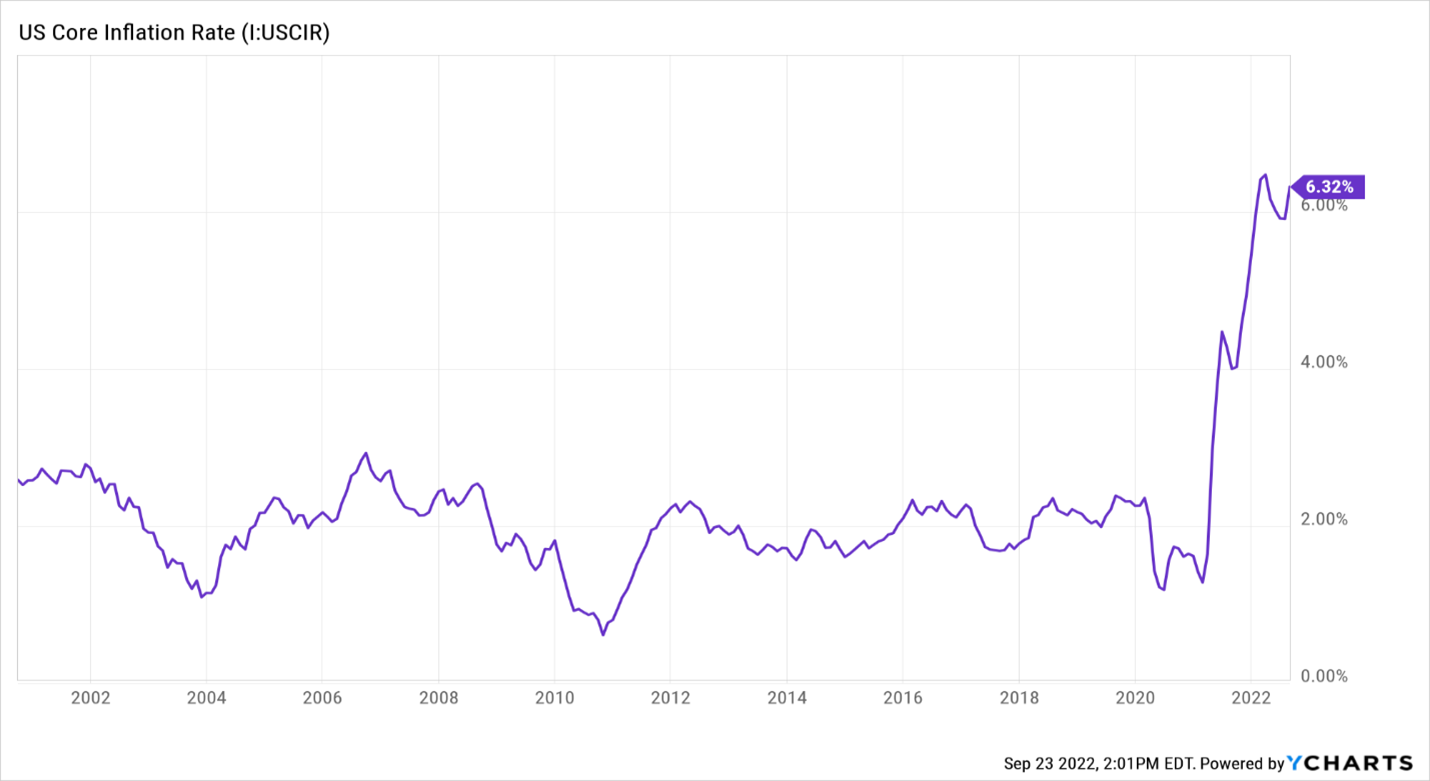 What are the tools that the Fed can use?

While this is a great oversimplification, the Fed's primary tool is the Federal Funds Rate. There are other tools employed by the Fed, the most prominent of the last decade being the purchase and sale of bonds in the open marketplace. 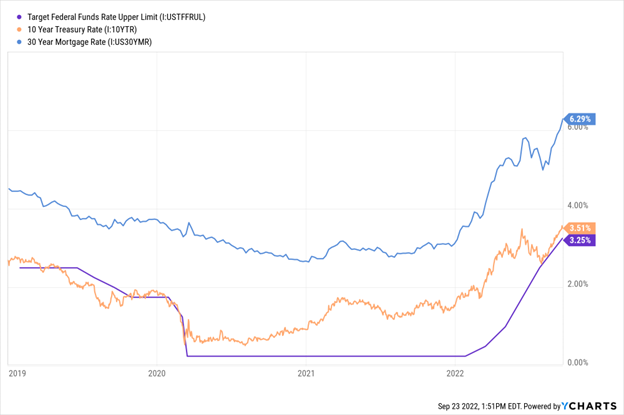 Why are interest rates important?

The prevailing interest rate is intricately woven into the fabric of the economy. Let’s consider the decisions one household might make based on interest rates. Suppose the cost of borrowing money is about 3%. In that case, the average consumer might be inclined to borrow money to remodel a kitchen, landscape the backyard, or buy a new washer/dryer. If the interest rate to borrow for those projects was 6% or higher, that individual consumer might think twice about doing the project, delay the project indefinitely, or put it off until the project can be completed using cash on hand.

Now multiply those same buying decisions across the 129M households in the US, and you can see how they would add up. These types of housing decisions make up about 15% of the US GDP. The same relationship holds for companies that are investing in R&D, are thinking about making capital expenditures, or are thinking about hiring employees.

Where did the Fed go wrong?

Year-over-year inflation started to rise dramatically in March and April of 2021. You may recall that the Fed called this “transitory” inflation at the time. In the decision-making process, as expressed publicly at the time, the Fed felt that supply and demand imbalances would eventually subside and that inflation would return to the identified target range. As a result, at the time, the Fed decided to keep the Fed Funds rate at zero.

As a strong Monday morning quarterback, my sense is that this is where things went astray. Mid-2021 was probably when the Fed should have started raising rates to slow the sudden rise of inflation, and now the Fed is essentially playing catchup.

What is the impact on the stock market?

As fickle as it may be, the stock market can be thought of as a collective set of expectations about the economy's future. More importantly for investors, as succinctly put by famed investor Benjamin Graham and later quoted by Warren Buffet, the market can be of two minds: “in the short run, the market is a voting machine but in the long run, it is a weighing machine.”

Figure 3 is a demonstration of the voting machine at work. As the Fed Funds rate rose over the course of the last twelve months (in the short run), rising interest rates will cause the economy to slow, which caused the S&P 500 index to fall. 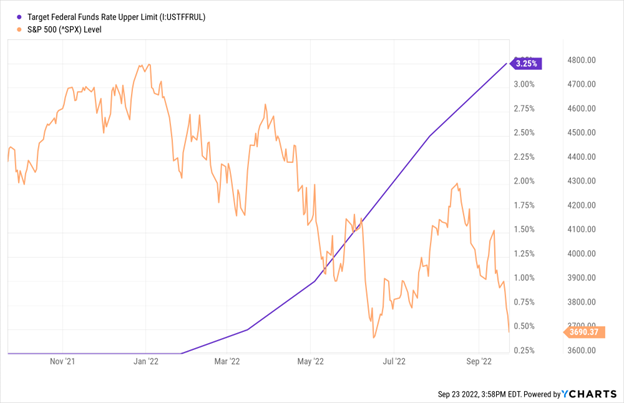 What is the Fed saying now?

The Fed released notes on September 21, 2022, indicating that the Fed “is strongly committed to returning inflation to its 2 percent objective”. As such, the Fed raised the Fed Funds Rate to between 3% and 3.25%. Additionally, the Fed set expectations that rates will rise to between 4% and 4.5% by the end of this year. This was the third consecutive 0.75% (75 bps) raise in 2022. This would also indicate that rates must increase by at least 1% to 1.5% to achieve that goal by the end of 2022 or early in 2023.

In a statement, Fed Chairman Jerome Powell said, “We have got to get inflation behind us. I wish there were a painless way to do that. There isn’t.” This statement represents a definitive change of tone. The Fed has stopped using language like “soft landing” and has expressed a commitment to fighting inflation at the potential cost of slowing down the economy and increasing the unemployment rate.

It is worth noting that at the Fed Funds rate being projected, and using Figure 2 as a guide, it is easy to see a path to an average 30-year mortgage well above 7% in 2023. It is also worth noting that this might be normal and that the low-interest rates of the last few years are an anomaly. If you reference Figure 4, you will notice that the Fed Funds rate has been above the current Fed Funds rate more often than it has been below. It is only a result of the great housing crisis or Great Recession of 2007-2009 that brought us the low-interest rates of the last few years.

What has the Fed done in the recent past?

Figure 4. A plot of the Fed Funds Rate from January 1, 1990, to the present. Areas of grey indicate recessions.

Where does this leave us?

The Fed generally sticks to what they are committing to do. The Fed is a data-driven organization and can and will change its course of action as the data warrants. What can be said for certain is that they will continue to raise interest rates until inflation is under control.

If this holds true, that means that in the short term, say within the next 6-12 months, the stock market will likely continue to be volatile and may see declines from current levels. In other words, the “voting” part of Benjamin Graham's quote should be in full effect.

That’s the bad news. The good news is (I hope) that most people reading this letter are in the “weighing” category. In the good news column, the Fed has consistently acted in the best interest of the long-term economy. The Fed’s dual mandate of low inflation and full employment are both very positive for a growing economy.

I am often asked for predictions about what's going to happen in the near term - when will a recession start, how long will a recession last, what will interest rates be at year-end, when will the market find a bottom, etc. I resist the temptation to offer thoughts on these short-term, voting machine types of questions. I do not believe that these data points can be consistently accurately predicted. I say “consistently accurately” because there are talking heads who say “recession is coming!”...and they are wrong until finally, they are correct, even if it took 10+ years of being wrong before they are right. Instead, I generally respond that if history is any indicator, there will be periods of uncertainty and volatility in the economy and the stock market, but that at some point in the not-too-distant future, these painful periods will be but a distant memory.

As long-term investors, as advocates of the “weighing machine,” it is imperative to remember that we have seen four official recessions (and probably a fifth we are currently in or about to enter) in the 32 years represented in Figure 4. While uncomfortable, this period of uncertainty and volatility will pass. It sucks, and it can hurt, but it is only temporary.

As always, I appreciate the confidence you place in me. Please ask if you want to have additional discussions of these ideas or your portfolio.